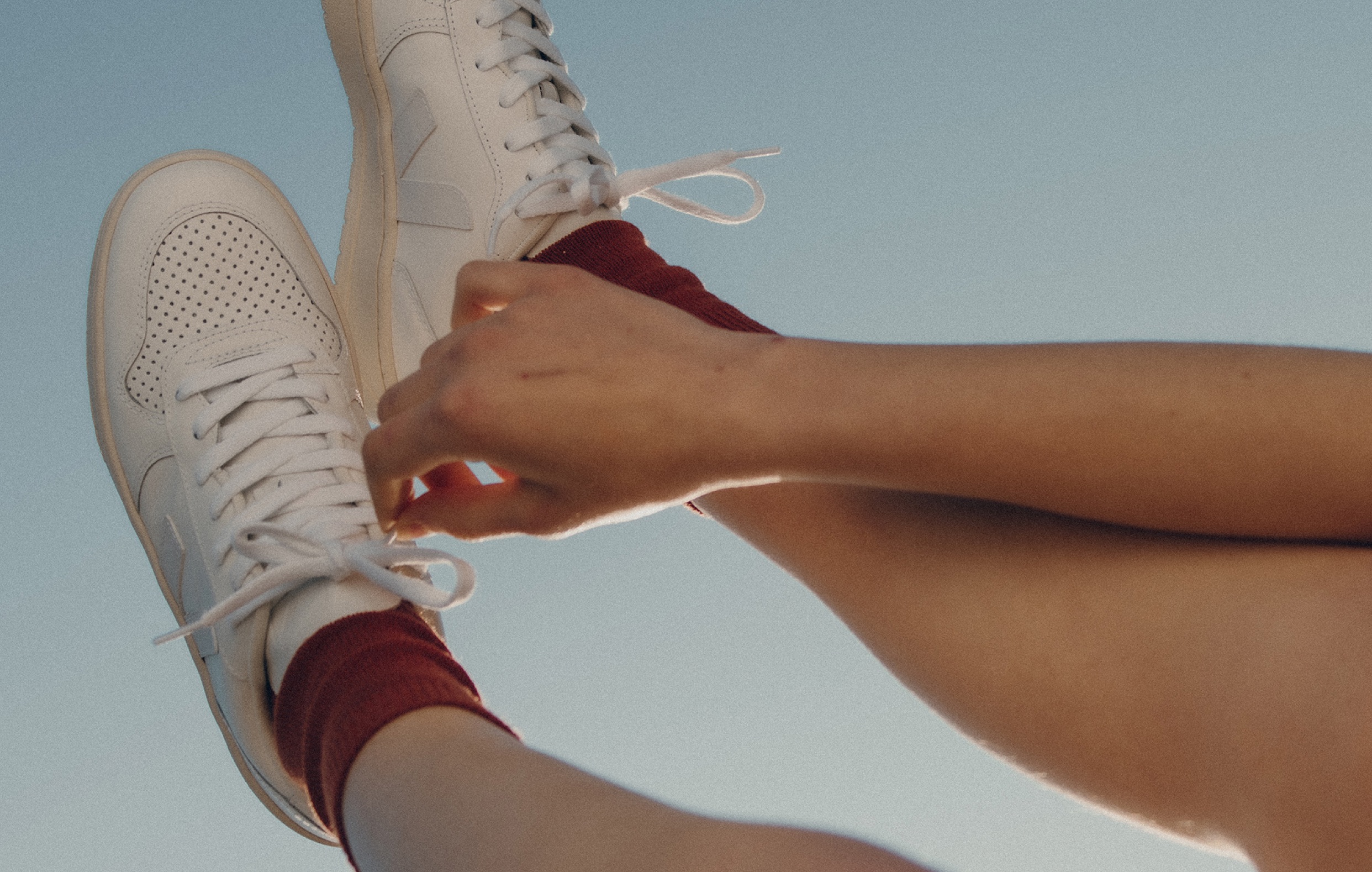 How are sneakers made ?

VEJA is Brazilian for "look", looking beyond the sneakers, looking at how they're made.

How are VEJA's made? How much are labourers paid? How much does an organic cotton producer earn? What are the chemicals used in a pair of VEJA? VEJA's transparency boils down to about ten or so questions.

Making our way back up the production chain

Since 2004, we have set the price of our organic and agroecological cotton in advance, in agreement with producer associations from Brazil and Peru.

Since the price is completely decorrelated from the market and its fluctuations, the contracts therefore ensure the producers a greater financial security. This security is all the stronger since they know how much they are going to earn from the cotton before they even plant it.

This year VEJA is paying R$ 24.77 per kilo of cotton. We increased the incentives for the producers who use agroecological practices and kept the bonus for the associations.

In 2021 we paid R$18,72 which includes the bonus for the producer and the associations to continue supporting their operations.

Evolution of the organic cotton price

On average, we purchased our cotton twice as much as market price in 2017.

Our VEJA sneakers cost 5 times more to produce than big brand sneakers. Because we use fair trade and organic raw materials, because they are more economically equitable for all parties involved in the production chain, because we invest in research and new technologies.

We asked a Chinese factory to provide a cost estimation for producing our Esplar style.

A VEJA would cost 3 times less to produce in that factory.

In the VEJA factories in Brazil

In a Chinese factory

But they wouldn't be made with socially and environmentally responsible materials and processes.

Today, 100% of the logistics for the VEJA online site and the Parisian stores are managed by Log’ins, a company that promotes social and professional integration.

In their warehouse located in the South of Paris, Log’ins is in charge of receiving the sneakers from Brazil, organizing their storage, preparing orders, and shipping worldwide our sneakers.
By 2021, 163 employees recognized as disabled workers were supported by Log'ins. Their main objective is to provide them with a stable and secure position and eventually the confidence to find another job.

Since 2004, we have been applying fair trade principles on the ground. In other words, we work directly with producers and cut out the middleman.

We pre-finance harvests by as much as 50%. In other words, organic cotton is purchased a year before it's turned into a sneaker.

At the beginning of the year, we agree on the price of cotton signing a contract valid for two years with the producers.

That way, the producers know how much they will earn from the harvest before planting a single seed. This price is market-uncorrelated to make sure producers can live decently and reinvest in their farms.

At the beginning of the year, we agree on the price of cotton signing an annual contract with the producers. That way, the producers know how much they will earn from the harvest before planting a single seed. This price is market-decorrelated to make sure producers can live decently and reinvest in their farm.

Transparency,
the future of environmentalism ?

All of our cotton has been certified organic since VEJA was launched. Our new Peruvian partner is also certified.

Chemical transparency
VEJA is continuously analyzing the chemical safety of our sneakers to ensure that they do not contain toxic or polluting elements.

As of October 2021, our material suppliers must submit a test report specifying that their products do not contain the most commonly used hazardous chemicals in the fashion industry.

To facilitate the process, control, and monitor this across the production chain, our sourcing team has developed the VEJA Restricted Substances Policy.

Our Restricted Substances Policy helps identify and reduce the impact of these hazardous substances in our materials.

This document applies to all sneakers for women, men, and children.

In 2020, from all the textiles and leathers VEJA used, 85% are considered environmentally 'preferred' raw materials.

Conventional cotton is used as a support in some specific textiles.

This material is laminated (or bonded) to the back of the fabric to make it more durable, resilient, and strong.

VEJA is not producing this fabric in organic cotton because the volume we use is considerably low.

VEJA’s textiles and leather consumption in 2020

Organic cotton: 9% of the total weight

Amazonian rubber: 8% of the total weight

Other 'preferred' materials, such as rice waste, EVA from sugar cane, and recycled materials: 29%

Total: 46% of a pair of Esplar is made out of 'preferred' materials.

*Leather was not considered a 'preferred' material, and it represents 20% of the shoes’ total weight

See VEJA certification by B Corp

In 2004, both founders created VEJA from scratch, without experience or even role models. Instead, they followed their instincts to create a project outside the already established paths. Their objective: to create the company they would have liked to work for, in terms of atmosphere, responsibilities, salary level, and equality. Now that the VEJA team has more than 300 young talents, B Corp allows us to confront VEJA with reality. It helps us realize how much we are doing wrong.

Initiated in 2017, we were B Corp certified in December 2018. It took us almost a year to answer all the questions, and at the end of that year, some weaknesses began to become much clearer.

For example, VEJA's governance can be improved: we don't have a board of directors and have always turned away investors, leaving many decisions and arguably too much power in the hands of just the two founders.

So B Corp will help us to know and underline our weaknesses as a project, and to create better goals and rules. It already gave us many ideas easy to implement, It validated also a lot of good news: for example, the money gender gap: 4 out of the 5 highest earners in the company are women.

We realized that after years of "doing "we had not taken much time to stop for a moment and write things down, so B Corp allowed us to formalize many things: the suppliers' code of conduct, available on the website, the employees' code of conduct or the employees' guide: a common guide for all the world teams (France, Brazil, US).

But there is still a long way to go. And B Corp will help us on this journey. VEJA is proud to be part of this group, which counts long-term role models such as Patagonia.

See more about VEJA certification on B Corp website.

This code clarifies an organization's mission, values, and principles, and a commitment to ourselves to remain honest and responsible in our actions and decisions.

VEJA qualifies its direct suppliers and all their factory workers on the code of conduct.

To recognize a situation and to be able to denounce it, each supplier employee counts with training on the subject.

We want to create an environment where everyone feels free to speak up.

Any request or non-compliance with its application can be addressed through several communication channels.

In 2020, VEJA did not receive any complaints.

The worker rights are available in all production locations and are regularly checked by our product team during visits.

This document states the VEJA code of conduct in Portuguese, the local language.

The document contains the contact details for complaints, where workers can inform about overtime or canceled holidays or other problems regarding worker's rights related to VEJA orders.

See the code of conduct of VEJA

If there would be a complaint, we would then try to figure out what has been the reason for the problem. If it should be discovered that we were responsible because of improper planning, changes at short notice, or similar reasons, we would re-check our processes and strategies even more to avoid such consequences in the future.

For all other causes, we would discuss with suppliers how the situation could be improved to prevent it from happening again.

We also test, under the same conditions, the mechanical properties of our shoes.

Repeated movements (bending, friction, etc.) are carried out by machines on pairs of control sneakers selected at random. We then measure sole wear, seam resistance, etc.